Winners of the 2022 Innovation Awards 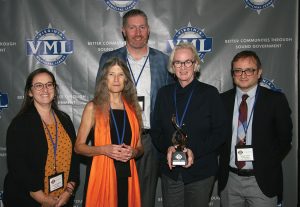 Blacksburg is committed to meeting the needs of its older residents.  An important element of that work is to create both a process and a culture where more of our residents are pre-planning for their later years so they can remain safe, independent, and maintain a high quality of life as they age.

The Aging in Community (AiC) Leadership Team brings together local government staff with community advocates, regional planners, aging experts, health & social service agencies, non-profits, and the philanthropic sector. Since its inception, five senior staff from the Town of Blacksburg have served on the AiC Team and have taken the lead in developing the suite of Aging in Place planning resources including a workbook and facilitated workshops that enable group discussion and collaborative learning.  These workshops have been so popular that the team recognized the need to build out a network of community members who could lead workshops of their own. This prompted the Town to create a step-by-step facilitation guide and other workshop resources.

What the judges said: “Particularly commendable is how Blacksburg sought to build not only resources but a culture of supporting older adults holistically within its professional staff and partner institutions through the “Train the Trainer” series. 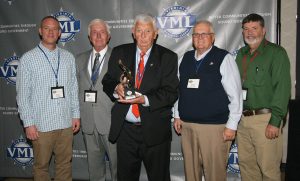 During the summer of high gas prices, residents and visitors were encouraged to stop by participating Marion businesses and sign up to win a $100 gas card. Participants could register each week at every business. A winner was drawn each Tuesday and announced each Wednesday on local media and the town’s social media accounts starting Memorial Day week through Labor Day week.

In 24 hours, over 30 businesses signed up for the promotion. As soon as week #4 the Town had to reorder entry forms. Due to its popularity and interest by sponsoring businesses, the contest was extended additional weeks and received lots of positive regional press. This promotion not only brought media and public attention all summer but provided Marion businesses with a huge database of potential customers – at ZERO COST TO THE TOWN!

What the judges said: This simple but productive marking campaign was good teaming of business and government resources. It had a clear goal to support/increase the local economy, overcoming impediments of high fuel costs and tight budgets and made it happen. 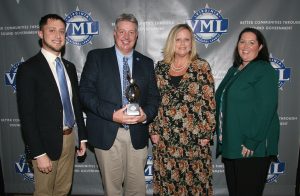 The adage of “perception is reality” continued to plague the Town of Warsaw as residents and visitors alike were forced to drive by an abandoned shopping center in downtown. This not only lowered local morale but dissuaded any economic investment into the area. Something transformative needed to take its place. After public input sessions and legal battles, the Town acquired the 11.4-acre property and demolished the structure to create a new stormwater system along Main Street and the downtown corridor, funneling the water to a beautiful 2-acre pond. The remaining areas of the property became walking trails, parking, decorative acorn lighting, signage, and an observation deck overlooking a local creek all linked to an existing trail system, adding miles of trails in Town limits.

The Town is currently working with a zipline manufacturer to install a 600’ zipline that soars through the wooded areas of the park, along with near-future plans of a 9-hole disc golf course. This project provided a solution to stormwater flooding, cleaned local waterways, added much needed greenspace and public amenities, as well as provided regional attractions the Town.

What the judges said: Turning an unproductive eyesore in an attractive community amenity is a good thing! Being able to incorporate community partnerships and available grant entities to pretty much fund the whole project is a great win. 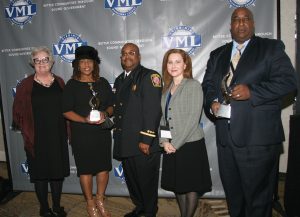 In July 2021, the City of Newport News launched the Community Assistance Response (CARE) program.  This progressive new program is the result of a partnership between the Newport News Fire Department, the Newport News Police Department, and the Hampton-Newport News Community Services Board.  Members of the CARE team provide initial support for those experiencing mental or behavioral health issues within Newport News. Crisis Intervention Teams like the CARE program are advanced, community-based approaches to improve the outcomes of these encounters.

When the Newport News Emergency Communications Center receives a call for service indicating a need for crisis intervention or other mental health supports, they dispatch the CARE team. The team consists of a Newport News Fire Department paramedic and a qualified mental health provider from the Hampton-Newport News Community Services Board.  The CARE team responds in a marked vehicle and assesses the individual, providing necessary interventions and support. A police officer also responds to ensure the safety of those involved, but does not serve as lead.

What the judges said: A great program that demonstrates compassion and consideration for both the individuals experiencing mental health episodes and those who seek to assist them.

In 2020, the City of Newport News partnered with Volunteers of America Chesapeake and Carolinas (VOACC) to launch Newport News YouthBuild.  The U.S. Department of Labor awarded VOACC) and the city a $1.4 million YouthBuild grant to create this new workforce development and education program for 90 young people in the city.

Over the past two years, the program has adapted to meet the needs of young men and women ages 16-24 who live in Newport News. Over the past year, YouthBuild has developed into a dynamic program by making significant enhancements, from new partnerships with the business community to additional credentialing programs for young people. YouthBuild has also enhanced its volunteer program, giving program participants additional opportunities to receive hands-on training in construction and other in-demand industries, including carpentry, maintenance and pre-apprenticeships in plumbing, heating ventilation and air conditioning, and electrical services.

The program lasts eight months, with follow-up support services for one year. Participants receive stipends after successfully completing program milestones. They also receive support in financial management, budgeting, and more. Support services include career counseling, help during job searches and the application process, outreach to community businesses for placement, and more. The most engaging part of the program is the volunteer component. Youth receive hands-on construction experience building homes for Habitat for Humanity in the city’s Southeast Community, where many of the program participants live.

What the judges said: A wonderful program that shows how a locality can build on an initial success to create a truly transformative experience for young people. The trifecta of city, business and volunteer resources means that participants are supported throughout and can really feel invested in creating their own future. 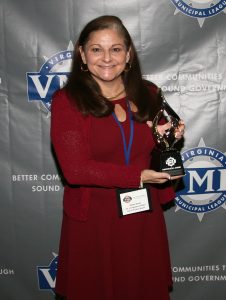 In the wake of three devastating storms culminating with Hurricane Matthew in 2016, the City of Virginia Beach developed a comprehensive Flood Protection Program to address the most critical needs. The required funding ($567.5 Million) to complete these “Phase I” programs far exceeded the amount City Council could authorize ($74 Million) on its own. In June 2021, the City Council decided to put the $567.5 million Flood Protection Program bond referendum on the next general election ballot.

The City’s communication team leveraged a considerable bank of existing visual assets, to include photography, video, audio, and graphics created by its multimedia services department. As part of the citizen participation and community engagement effort, the City of Virginia Beach held more than 26 virtual and in-person meetings. These events were designed to present the facts about flooding issues locally, talk about the benefits of the Flood Protection Program, and the risks associated with inaction.

What the judges said: Ultimately, the dramatic turnaround in public opinion speaks volumes about the efficacy of this communications project. The Flood Protection Program is clearly an incredibly high-stakes project for the future of Virginia Beach and this campaign effectively communicated the importance and complexity of the issue and necessary infrastructure in an engaging way. 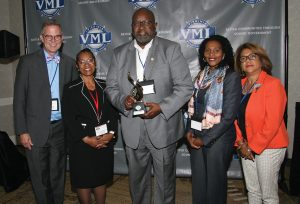 Like so many locales, Roanoke has recently experienced an increase in violence.  Early in the City’s response, it was clear that while the police have a significant role to play, addressing violent crime required a response from the entire community.  Jeffrey Powell, Director of General Services was challenged by family members – what was he personally doing to help address this issue?

Embracing this challenge, Jeffrey inquired of the City Manager what he could do to help the police in their response. City Manager Bob Cowell challenged Jeffrey to present a proposal at an upcoming leadership retreat. Jeffrey’s proposal for a “whole of government” response was embraced by the Directors and they, under Jeffrey’s leadership prepared a plan of action. Using year-end surplus and later ARPA funding, the Star City Safe initiative was born.

Star City Safe is an approach involving staff from various City departments – all under the leadership of Jeffrey whose “day job” focuses on managing fleet, solid waste, purchasing, risk management and facilities. The Star City Safe initiative focuses on youth, ensuring they have a safe and supportive environment in which to prosper, thereby lessening the likelihood of engaging in risky behaviors that could lead to being the victim or perpetrator of violence. The initiative includes extended supervised hours at library branches and recreation centers, movie and sports nights, mentoring services, job training and apprenticeships, conflict management training, and more.

What the judges said: It’s almost impossible to choose a winner in this category because there are so many inspiring people doing amazing work in local governments across Virginia. Mr. Powell is this year’s winner not only because of his willingness to work outside his regular duties, but his obvious compassion for the residents of his city. Well done sir! 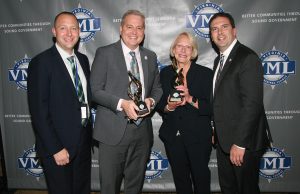 The City of Williamsburg has a tourism-based economy, which means its financial health is often determined by circumstances beyond the City’s control such as inflation, cost of goods, behaviors or, most applicable recently, a pandemic. To combat that risk, the City maintains an extremely high policy threshold for reserve funds, requiring an equivalent of 35% of last year’s revenues to be held in an operating reserve.

When COVID-19 hit, the risk of outside circumstances severely affecting the tourism-based economy became a reality. However, City staff recognized early that a pandemic is longer term than a typical emergency scenario and requires a different management strategy. So, instead of using reserve funds, the City dedicated any additional funds that could possibly be used to make up for the shortfalls.

This strategy has allowed the City to tap into the reserves occasionally without dipping below the 35% threshold. Its success is evident in the FY23 Adopted Budget, which includes a $0.02 decrease in the real property tax rate and a 20% reduction in the personal property tax assessment ratio. By budgeting conservatively and maintaining a healthy reserve, the City could offer residents a return on their investment in the form of reduced tax burdens — and implement a revised pay plan that increased staff salaries.

What the judges said: The proof is in the numbers, and the City of Williamsburg did a fantastic job proving they could manage risk during one of the riskiest financial periods in recent memory. The City’s fiscal discipline and foresight is commendable.