Presentations from a number of sessions at the 2017 VML annual conference earlier this month are available to view online. Whether you attended the conference or not, you are sure to find something interesting and new. Such as these nuggets:

Take a look for a taste of what your colleagues discovered at the 2017 event.

VML members adopted the 2018 VML Legislative Program on Monday, Oct. 2, at the business meeting of the 2017 annual conference in Williamsburg. The program reflects VML’s positions on potential legislative issues and will be shared with legislators in advance of the 2018 General Assembly session.

Adjusted for growth in population and inflation, the total state budget grew by 21 percent over the 10-year period from FY08-FY2017, according to a report on state spending given at the Oct. 10 meeting of the Joint Legislative Audit and Review Commission.

More details and statistics are available in the full report.

The Federal Reserve Bank of Richmond reports that the state “economy showed some signs of improvement in recent months as payroll employment grew slightly and household conditions remained stable; however, housing market reports were more mixed.”

The chart below is based on Federal Reserve information and shows the employment increases and decreases by major industrial sectors. 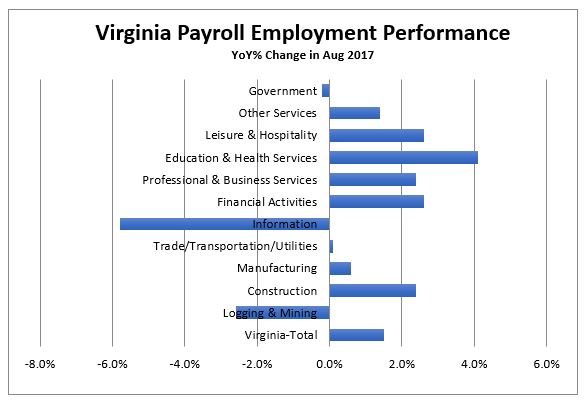 With the exceptions of the Lynchburg and Virginia Beach-Norfolk Metro Areas, payroll employment in the other major metropolitan areas of the state increased in the August comparisons. Employment in the Richmond MSA had the strongest growth rate at 2.44 percent.

The share of Virginia mortgages with payments 90 or more days past due declined to 1.0 percent. And, delinquency rates for fixed and adjustable rate conventional loans also declined in the second quarter of 2017 to 0.7 percent and 2.0 percent, respectively.

The housing market continues to broadcast mixed signals. New residential permits in August were up from the previous month by 4.4 percent, but were down 6.2 percent compared to August of 2016. Home prices rose in August in every metro area of the state except Roanoke, increasing 2.7 percent in Virginia compared to a year ago.

For local governments readying themselves for budget development in 2018, the economic news means that statewide revenue growth tied to economic growth will be positive but marginal. A downturn in the economy will quickly turn into a thorny problem for local decision makers.

State revenues could be caught up in federal tax reform fight

1) make the tax code simple, fair and easy to understand;

2) give American workers a pay raise by allowing them to keep more of their paychecks;

3) make America the jobs magnet of the world by leveling the playing field for American businesses; and

4) return to America the trillions of dollars that are kept offshore to reinvest in the nation’s economy.

The nine-page document is basically a statement of goals and objectives. Details are scant, meaning the effects on individual taxpayers, businesses, and state and local governments are more speculative than knowable at this time.

Different economists are arguing over the framework’s influence on the national economy, claiming the changes will turbocharge the economy or have only modest if any effects.

Politicians on one side of the political aisle or the other assert that either the President’s plan will deliver major tax gains for the richest Americans or the reduction in tax rates will provide substantive tax relief for the middle class.

Paying for tax reform is also up in the air. Can economic growth fill the estimated $1.5 trillion revenue shortfall? Can cuts in federal spending close an already widening budget gap? And, how will a potential increase in deficit spending affect the national debt?

In Virginia, the General Assembly and the Virginia Department of Taxation will be closely watching the action and antics in Congress for a number of reasons.

First, a successful change at the federal level will likely exert political pressure on the state legislature to act in a similar fashion. For example, the repeal of state and local tax deductions on federal taxes could push state and municipal legislative bodies to lower their tax rates. Or, the General Assembly may choose to “reform” local business taxes.

Second, because over 60.0 percent of the state’s general fund is based on income tax revenue, changes at the state level (and federal level) could significantly affect the amounts of intergovernmental revenue that local budgets depend upon to deliver services.

VML will be monitoring and informing members as the federal tax debate progresses.

The Virginia Department of Motor Vehicles is in the process of conducting a passenger carrier study as requested by Senator Charles W. Carrico, chairman of the Senate Transportation Committee.

The 2015 legislation (HB 1662) authorizing transportation network companies in Virginia included a requirement for DMV to enforce the provisions of the act and provide a report to the General Assembly in December 2016 on the first 18 months of the companies’ operations. One section of this report contained a recommendation for continued study of changes in the marketplace and other issues related to passenger transportation services.

These items reflect not only findings of the 2016 report, but also issues brought to the attention of DMV by several of the study stakeholders. Based on these items, DMV determined that the study should focus on three categories:

Several items listed above reference practices of the taxi industry. Since local governments have primary responsibility in regulating taxi services, DMV held an initial meeting with representatives from Arlington, Fairfax, Alexandria, Newport News, Loudoun, Chesterfield, Norfolk, Charlottesville, VML, and VACO to gather information on how they have been addressing changes in the industry. Several of the localities told DMV of recent updates to taxi ordinances done at the request of the taxi industry.

Two meeting have been held by DMV with testimony given by all interested stakeholders. In mid-September DMV released a “concept proposal” for stakeholder and public review.

VML has followed these guiding principles in support of local government regulatory authority at these meetings:

VML has been an active participant in all the ongoing discussions on this subject and will keep you informed as the study moves forward to a final report. We thank our members who have supplied their time and expertise in providing DMV with requested background material for this study.

Feedback sought on substance abuse at colleges and trauma-informed care

The Virginia Commission on Youth is accepting public comment on two issues: substance use prevention and intervention at Virginia’s colleges and universities and trauma-informed care. Find the recommendations presented to the VCOY by Executive Director Amy Atkinson in September here: College and University Substance Use Prevention and Intervention Programs and Trauma Informed Care.

Public comments received by the deadline will be provided to the Commission for consideration at the Nov. 8 Commission meeting at 1:00 p.m. in House Committee Room, Ground Floor, Pocahontas Building.