The Virginia Institute of Government (VIG), a unit of the Weldon Cooper Center for Public Service, was established in 1994, by the Virginia General Assembly, to provide training, technical assistance, and information resources to its member local governments. Read more >

As previously reported, SB694 (Obenshain) was substantially changed in the House to create expensive, difficult issues for local governments when eminent domain is required to complete a public works project.

The House substitute was rejected on the Senate floor this afternoon which will send the bill to conference.

The bill upsets a decades-long balance between the needs of the public and the interests of landowners. If SB694 were to be signed into law with the House substitute, it would make public projects much more expensive to carry out due to the increase in suits that will be filed by landowners for the following reasons:

It’s important to note that although the above provisions were in the introduced SB666, the patron, Senator Petersen, agreed to remove all through negotiations with local governments and others.

Bills that passed out of Counties, Cities and Towns last Friday

The below bills passed out of the House Counties, Cities and Towns Committee on Friday, March 4.

SB537 (Marsden) Replacement of trees during development process in certain localities. If you are a locality with a population density of at least 75 persons per square mile or in the Chesapeake Bay watershed you may adopt an ordinance regarding the planting and replacement of trees. This bill adds several requirements to the content of this ordinance.  It also creates a Collaborative Decision-Making Group to study trees further and report to the Chairmen of House Counties, Cities and Towns and the Senate Committee on Agriculture, Conservation and Natural Resources by December 1, 2022.

SB286 (Ebbin) Required disclosures for buyer to beware; buyer to exercise necessary due diligence.   This bill now requires that if you have an historic district ordinance you are required to include in the residential property disclosure statement the mention of a survey of the property or lack thereof.

SB35 (Favola) Legal status of plan. Government bodies may agree with an applicant in a Virginia Code Section 15.2-2232 review to extend the review time.

SB259 (Bell) Performance and payment bonds. This bill clarifies similar confusing language in the current statute for performance and payment bonds and makes clear that such bonds are only required for non-transportation related construction contracts over $500,000 and transportation related contracts over $350,000. Bonds below those amounts are optional.

“They say lawmakers should pass ‘hold harmless’ measures so that cities and counties aren’t shortchanged if the state fails to come up with enough money to keep [the Governor’s] promise of replacing the tax money ‘dollar for dollar’… Many smaller but growing cities will lose if lawmakers adopt a reimbursement formula that doesn’t reflect the growth in money collected on the car tax, or if the formula is based on statewide growth, not local growth rates.”

“Even then, the cost of the refunds continued to rise, so in 2004 the legislature again amended the Personal Property Tax Relief Act by setting the reimbursement amount at $950 million in perpetuity beginning in the 2006 tax year”.

As we discussed in last week’s eNews, a tricky piece of creating a revenue replacement method is forecasting the amount of revenue that will need replacing.

But the component of successfully replacing the lost revenue is more than tricky, it’s impossible! That is, getting future General Assemblies to follow a directive from a past General Assembly. Just ask Governor Jim Gilmore.

In the battle over the Car Tax in the late nineties and early 2000s, the G.A. and Gov. Gilmore enacted a local tax relief law that directed the state to hold local budgets harmless. Within a few years, however, the G.A. announced that Virginia could not afford to honor its commitment to full revenue replacement as it had pledged under the law. Then, in 2004, the G.A. and Governor Warner were forced to increase taxes to protect the state budget, and they de-coupled the local lost revenue repayments from inflation, freezing those payments to localities at the 2006 level.

The local sales tax is a growing revenue source today (see chart below), just as the personal property tax was in 1998 when the G.A. began its years of wrangling over the Car Tax. 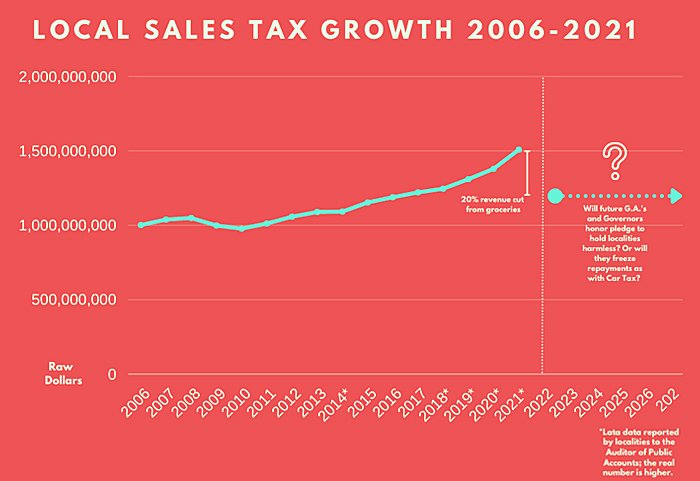 Can the state government afford to repay local governments for roughly 20 percent of this lost revenue, in perpetuity? Or as is more likely, will history repeat itself and what seemed like a reasonable revenue replacement method be revealed to be a fiscally reckless idea that must be halted to protect the state’s credit rating?

VML asks our members to reach out to your legislators, particularly if they are the conferees listed below, and encourage them honor the lessons of not-so-recent history; anything worth doing is worth doing right!

SB657 (Stuart) has received media attention because it would remove air and water pollution permitting authority from the appointees that serve on the Air Pollution Control Board and State Water Control Board and vest this authority in the Department of Environmental Quality. However, a little noticed change to SB657 would also expand local authority to approve and site economic development projects.

Specifically, SB657 would amend Code of Virginia §10.1-1307 (E) 3 to provide localities with the authority to deem a site as suitable for an activity requiring an air pollution permit “if the governing body of a locality in which a facility or activity is proposed has resolved that the location and operation of the proposed activity or facility is suitable to the area in which it is located”.

This provides clarification that local governments have a role in determining if activities requiring air pollution control permits under §10.1-1307 are appropriate for their community.

VML has consistently advocated that localities should have a role in the siting of air pollution permits given that local governments are better positioned to asses local conditions and determine if particular uses or activities are suited to a specific site.

Status: SB657 was approved by the Senate 32-8 and the House 51-47 and is now headed to the Governor for his signature or amendment.

HB563 (O’Quinn) and SB473 (McClellan) are headed to conference. These bills establish the School Construction Grant Fund as well as create a data reserve tool. The Fund will use money from the Gaming Proceeds Fund and will be used only for school construction projects. The data reserve tool will be used to determine the relative age of infrastructure and maintenance needs of school divisions.

Another bill, SB471 (McClellan) would change the Literary Fund to increase the maximum loan amount available. However, the Senate rejected a House amendment to reenact SB471 in 2023. Since the amendment was rejected, SB471 now must go back to the House where it will most likely be sent to conference. 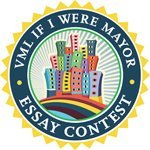 Last call for submissions: Friday is the deadline for Virginia’s 7th graders to enter the 2022 “If I Were Mayor” essay contest

The Virginia Municipal League (VML) invites all eligible Virginia 7th Graders to join its “If I were Mayor” essay contest.

Winning essays will be featured in the May issue of VML’s magazine Virginia Town & City. 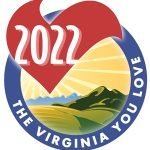 Get published in VML’s magazine! Tell us about your favorite outdoor recreation location in Virginia