Look for details next week

Budget amendments championed by Delegates and Senators were released yesterday at noon. The link is here.

The Senate Finance Committee conducted a hearing yesterday from non-committee members about the various amendments.  The Senate Finance and House Appropriations have about 3 weeks to finish their work before reporting out their respective budget packages.

VML will provide members next week a closer look of the budget amendments.

Modernizing the Communications Sales and Use Tax proposed

HB 1051 (Watts) applies the communications sales and use tax (5.0 percent rate) to services related to the streaming of audio and visual data, and prepaid calling. The bill also clarifies that the tax applies to communications services regardless of whether customers are charged a subscription fee, a periodic fee, or an actual usage fee.

The was referred to the House Finance Committee. 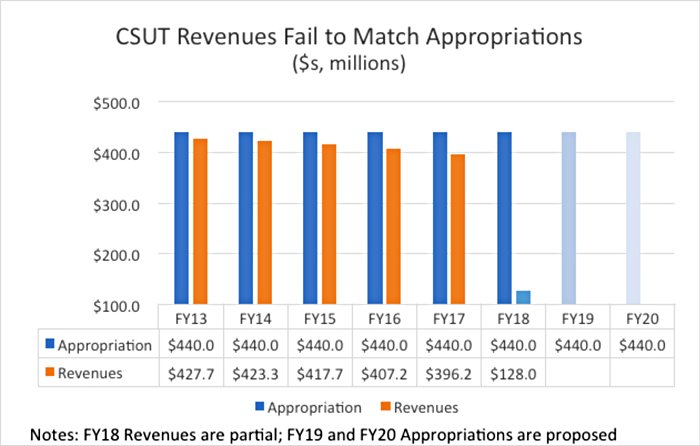 Talking points for change are based on a 2015 report from the Department of Taxation:

So why is everyone urging caution?

Secretary of Finance Aubrey Layne reported to the House and Senate money committees this week that December’s collections substantially increased beyond the revenue forecast even though there was one fewer day for deposits.

On a year-to-date basis, total collections are more than 2.0 percent greater than the FY 2018 official projection – 5.9 percent actual versus the 3.4 percent projected increase over FY17 collections.

However, the budget gurus in the executive and legislative branches are concerned. Here is a closer look at the reasons driving their doubts.

The first reason is the slow growth in income tax withholdings, a revenue source that accounts for almost 2/3 of the general fund. Year-to-date data indicate that the actual rate of increase is 3.0 percent rather than the projected 3.5 percent increase. According to a January report issued by the Federal Reserve Bank of Richmond, Virginia’s job growth this fiscal year is 0.9 percent, trailing the national job growth rate of 1.4 percent. Also, Federal Reserve information shows that despite a 3.7 percent unemployment rate, job numbers are still falling in areas across the state. The job totals in the Virginia Beach-Norfolk metropolitan area dropped by 0.8 percent compared to a year earlier. To meet the official revenue projection, withholding collections will have to increase to 4.0 percent for the January 2018—June 2018 period. (For this same period last year, collections did increase 5.9 percent.)

The second reason revolves around non-withholding tax collections, which make up over 16.0 percent of all general fund dollars. Year-to-date collections ballooned to over $1.0 billion compared with the $800.3 million during the same period last fiscal year. That’s an increase of 30.6 percent and far ahead of the annual estimate calling for 4.3 percent growth!

So much of non-withholding is driven by investors taking their profits made from stock investments. With the Dow Jones hitting record high closings, optimists may think this source will pump out even more revenue for the state’s coffers. But, state budgeteers view this revenue source as “volatile”, meaning, as credited to Sir Isaac Newton, “What goes up must come down.”

The remaining reasons flow from the drama swirling in Washington, D.C.

The fiscal impacts resulting from federal tax changes will affect the state’s treasury. In separate presentations to the House Finance, House Appropriations and Senate Finance Committees, the Virginia Tax Department (TAX) said certain provisions of the new federal law will impact the state regardless of whether the General Assembly chooses to conform. It is likely that the General Assembly won’t take up major legislation in this session to deal with the thorny fiscal impacts, preferring to address the issue in either a special session later this year or in 2019.

A federal government shutdown will also have budgetary and economic implications for Virginia. Congressional failure to pass a budget, stabilize the nation’s health insurance program for poor children, provide emergency relief for regions of the country upended by natural disasters, address the next round of automatic federal spending cuts through sequestration, and increase the federal debt ceiling can and will damage and disrupt state and local finances and the services provided.

In light of these reasons, it is no wonder that the legislature is wary of the good news embedded in the December revenue report. Instead, the General Assembly will take a deep breath and look at ways to squirrel away money for any of the aftershocks discussed above.

In FY17, the average local operational expenditure in excess of the required level for meeting the Standards of Quality was 81.39 percent, according to a recent report by the Virginia Department of Education.

The overspending shows the mismatch between what is funded through the SOQ, and what it actually costs for schools to try to meet the requirements not only for the SOQ, but for the Standards of Accreditation and the Standards of Learning.