We are a professional services firm committed to expanding, enhancing, and preserving the built environment. We are proud to serve our valued clients by helping them solve problems and meet the transportation, energy, program management, and urban infrastructure needs in their communities. Read more >

Sunday, Feb. 20, is scheduled as the day that the House and Senate budget-writing committees present their proposed amendments to the budgets proposed in mid-December by former Governor Ralph Northam.

We say “scheduled as the day” because last year’s General Assembly threw us all curve ball by delaying the release of the budgets until later in the week. So, while it’s not expected to happen this year, you cannot rule out the possibility of a delay.

The two committees use a similar format for their Sunday meetings. Each will present their recommendations by subcommittee. The subcommittee reports contain a brief analysis of the issues the panels faced along with a spreadsheet and (sometimes) the budget amendments often referred to as “half-sheets.”

Each subcommittee report is posted to the Committee’s website concurrent with its presentation.

On Thursday, the House and Senate will debate, vote, and ratify their amendment packages.

After each chamber approves their budget amendment package – and rejects the package proposed by the other chamber – the senior members of the money committees hold a budget conference to reconcile the spending and policy differences. The conference report typically comes together close to the end of the Session (adjournment is scheduled for March 12); both chambers must approve the conference report.

We have a long way to go before state budget development concludes. Stay vigilant! Your help will be needed (and much appreciated).

HB90 (McNamara) and SB451 (Boysko) reflect attempts by leaders in the Senate and House to shield localities from budget cuts that would be caused by eliminating groceries from the sales tax base.

Below are examples of the growing budget needs that exist across every Virginia locality, compared to sales taxes as source of local revenues. For localities large and small, a faulty revenue replacement scheme by the General Assembly could mean cuts to public services like law enforcement and public education or increases to local property taxes to account for the funding loss from the state.

The method the General Assembly chooses to replace local revenue must be dependable, particularly for smaller localities, if local budgets will truly be held harmless.

VML will continue to encourage the General Assembly and Governor to protect local government funding from cuts caused by eliminating sales taxes on groceries.

Senate Rehabilitation and Social Services reported on a split vote a substitute to HB1053 (Shin), which conforms the bill to SB581 (Morrissey) previously approved by the Committee and by the Senate.

As amended, the bill directs the State Board of Local and Regional Jails to convene a workgroup to review and make recommendations regarding the reduction or elimination of costs and fees charged to inmates in local or regional correctional facilities to defray the costs of an inmate’s keep, work release, or participation in educational or rehabilitative programs; to use telephone services; to purchase items or services from stores or commissaries; to use electronic visitation systems; and any other items deemed relevant by the Board. The workgroup would include all relevant stakeholders on the issue and report its findings and recommendations to the Chairmen of the House Committee on Public Safety and the Senate Committee on Rehabilitation and Social Services by Oct. 1, 2022.

Meanwhile, Morrissey’s SB581 was approved by the Senate and awaits assignment to a House committee.

HB827 (Wilt), which removes local government authority to ban weapons in government buildings, is to be heard in the Senate Judiciary Committee. It currently has the same language as SB74 (Chase) which was rejected by the same committee earlier in the session. There will be a substitute. VML opposes the bill as written.

The bill has three parts: 1. Requires any gun-buy back effort to offer the guns to dealers so the same guns will go back into circulation; 2. Removes current authority of local governments to ban weapons in their government buildings; and 3. Blocks localities from suing gun manufacturers for harm caused by the guns they manufactured.

Tell VML about your 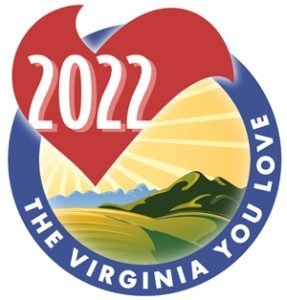 The Virginia Municipal League (VML) invites all eligible Virginia 7th Graders to join its “If I were Mayor” essay contest.

Winning essays will be featured in the May issue of VML’s magazine Virginia Town & City. 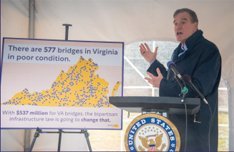 You may have heard about our bipartisan infrastructure bill – it’s a once-in-a-generation investment in roads, bridges, broadband, airports, electric vehicle charging stations and more. It’s going to be transformative for Virginia, and I’m proud to have brokered the compromise that got it done.

The coming months and years are going to be critical as we make sure that Virginia is poised to collect every dollar available to us. While the majority of all infrastructure funding will be delivered automatically to states and localities, the bill also approves dozens of competitive grant programs for important infrastructure projects to receive additional assistance.

If you’re interested in receiving more communication about these opportunities from my office, sign up for updates here by checking “Infrastructure Funding” under subscription options.

In short, all of this means that Virginia’s localities and stakeholders will soon have the opportunity to apply and compete for millions of dollars in federal infrastructure dollars.

That’s why I’m reaching out to you to let you know that I’ve compiled a page with resources and grant opportunities, which you can find here. It includes a detailed due date calendar and plenty of grant information so that you can see all the options available to you.

Among other things, the site:

There are quite literally millions of dollars that Virginia is eligible for – money for things like roads, broadband, and local projects of all types – and I want to make sure we’re getting our fair share. Take a minute to look through this page and see if there are grants you might be eligible for – these have the potential to be transformative for Virginia.

I’m looking forward to seeing Virginia benefit from these investments over the next decade. My office stands ready to help ensure that Virginia can take full advantage of this historic investment.

Join the nearly 600 cities around the country already benefiting from the effectiveness of the ICMA Leadership Academy the 12-week, online leadership program developed by the late General Colin Powell.

Our April Cohort is right around the corner. Join us in investing in the city workforce – empowering them to become better leaders today and into the future.

We would also like to acknowledge and congratulate the Virginia cities who have graduates from our programs:

About the ICMA Leadership Academy

Developed by the late General Colin Powell, the Professional Development Academy and ICMA, the High-Performance Leadership Academy is an online 12-week program that helps your workforce develop fundamental, practical leadership skills to deliver results for counties and our residents.