The week in legislation

This would take effect for any supplement made on or after July 1, 2020, meaning that it directly affects local budgets now under development.

The bill passed the House by two votes and has been referred to the Senate Judiciary Committee.

VML urges local governments to talk to their members on Senate Judiciary Committee as soon as possible about the problems with the bill:

VML opposes this bill for the following reasons:

Oppose bills allowing use easements without compensation or notice

Call before or as early as possible Monday morning

SB794 (Lewis) / HB831 (Carroll Foy)  will allow broadband and other communications services to occupy existing or future easements already occupied by electric distribution or communications facilities without notice to the landowner.

This will mean that a broadband company can use some easements without notifying the property owner or making any compensation.

HB831 (Carroll Foy) has been sent to Senate Commerce and Labor. We urge you to contact your member of that committee in opposition to the bill:

SB794 is the Senate counterpart to HB831. It has been sent to the House Labor and Commerce Committee. We urge you to call the members of that committeee to oppose SB794:

Loretto v. Teleprompter Manhattan CATV Corp. questioned whether a New York law required a landlord to permit a cable TV line to be run. The case states that:

“The fact that the state wished to provide a public service is of no consequence. This is a taking because the landlord had no choice but to surrender a portion of his building…”

The situation with SB794 is the same, the landowner would have no choice but to surrender a portion of his property to a private company.

Call before or as early as possible Monday morning

Having passed the House last week, HB582 (Guzman) will be taken up by the Senate Commerce and Labor Committee Monday. This bill is a mandate which repeals the existing prohibition on collective bargaining by public employees and creates a “Public Employee Relations Board” that would determine bargaining units and provide for certifications and decertification elections for bargaining representatives of state and local government employees.

We urge you to oppose the bill by calling the members of the Senate Commerce and Labor Committee:

In the Senate, SB939 gives the authority to local governments to adopt ordinances to allow collective bargaining by their employees. Employees in those localities without such ordinances would continue to be prohibited from striking. The bill has passed the Senate and is awaiting assignment in the House.

SB 993 (Locke) would remove the requirement that the state health commissioner and local health district directors hold medical degrees and instead allow someone with a master’s degree or doctoral degree in public health to serve in that capacity. The bill did not come from a legislative study or from the Administration.

VML would be less concerned with the bill if, at the very least, the local department references were removed.

On Sunday, Feb. 16, the House and Senate budget-writing committees will release their amendments to the budgets proposed by Governor Ralph Northam in December (the 2021-22 biennial budget – HB30/SB30 and the remainder of FY20 HB29/SB29).

The information released on Sunday should mostly just hit the highlights of each Committee’s efforts, broken down by each of their subcommittees. These subcommittee reports will be posted that day on the state budget website on Virginia’s Legislative Information System (LIS). They will not include all the detailed amendments (particularly language amendments) for each subcommittee. The detailed information on all the amendments will be available by Tuesday afternoon and posted on the state budget website on LIS.

On Thursday, each chamber will debate and approve their respective versions of the budget.

VML will provide pertinent details via eNews after the Sunday budget meetings, and additional details once all the amendments are made available.

There’s still time – but not much – to weigh in on amendments with your members. Do it today!

The Legislative Day Bulletin contains a list of all of the budget amendments sought by VML and its local partners. In talking with legislators, reference the item numbers of the proposed amendment(s) and reasons why the amendment is important to your community.

According to an article in the Richmond Times Dispatch, $112.3 million of the extra money will be required for deposit to the state’s Revenue Stabilization Fund (“Rainy Day Fund”) leaving $180.2 million for discretionary action by the General Assembly.

State coffers depend significantly on income tax revenue and more than half of the new money ($154 million) from today’s gubernatorial announcement comes from non-withholding income taxes paid by self-employed workers and investors who sell stock subject to capital gains taxes.

The revenue numbers released earlier in the week show general fund collections increased by 8.7 percent in January, driven by broad-based growth in payroll withholding, sales taxes, recordation taxes, and especially by a surge in non-withholding payments. On a fiscal year-to-date basis, total revenue collections are up 8.4 percent through January, well ahead of the current annual forecast recognizing 1.9 percent growth. (Note – It wasn’t until December of last year that the Northam Administration raised the official forecast from 1.2 percent to 1.9 percent.)

As the General Assembly tackles a final budget for the upcoming biennium, it may prove difficult for legislators to maintain a fiscal conservative approach in an expanding state economy. 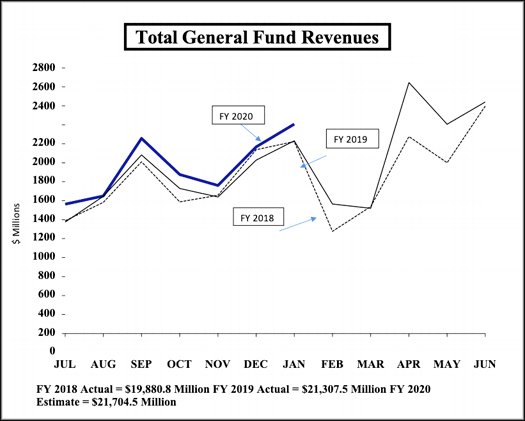 The week in legislation

SB269 (Bell) / HB722 (Reid) provide a Freedom of Information Act exemption for financial and proprietary records submitted with a loan application to a locality for the preservation or construction of affordable housing that is related to a U.S. Department of Housing and Urban Development or the Virginia Housing Development Authority application until such time as the records are released by one of those two entities. SB269 is on the House floor and HB722 is on the Senate floor.

SB650 (Boysko) / HB452 (Murphy) increase the small purchase threshold from $100,000 to $200,000 in the Virginia Public Procurement Act for goods and services other than professional services and non-transportation related construction. SB650 is on the House floor and HB452 is on the Senate floor.

SB341 (Locke) / HB890 (Sickles) change the threshold for construction management projects from $10 million to the threshold established in procedures established and adopted by the Secretary of Administration. SB341 is going to the House floor and HB890 is on the Senate floor.

SB380 (McPike) / HB1201 (Tran) allow localities to include in an invitation to bid criteria that may be used to determine whether a bidder who is not prequalified is a responsible bidder. These criteria may include history or good faith assurances, participation by the bidder and any potential subcontractors in apprenticeship training programs, or maintenance by the bidder and any potential subcontractors of records of compliance.

Any determination that the low bidder is not responsible that uses factors listed in the invitation to bid as a basis for its decision shall be presumptively considered an honest exercise of discretion. SB380 was reported by the House General Laws Committee.  HB1201 is in Senate General Laws and Technology Committee.

SB708 (McClellan) /  HB921 (Jones) require a housing authority required to submit an application to the U.S. Dept. of Housing and Urban Development to demolish, liquidate or otherwise dispose of a housing project to provide notice to the Virginia Department of Housing and Community Development, any agency responsible for administering tenant-based rental assistance and each tenant of the housing project. There are timelines and specific criteria that must be included in the notices. SB708 was reported from the House General Laws Committee. HB921 is in the Senate General Laws and Technology Committee.

Except for HB505, the following House bills have passed the Senate and will soon be working their way to the governor’s desk.

HB150 (Samirah) allows certain localities to impose a civil penalty not exceeding $500 per month on owners of derelict residential property that have not submitted a plan to renovate or demolish the derelict structure as required.

HB370 (Bell) authorizes a member of a board of zoning appeals to also serve as an officer of election.

HB406 (Subramayam) changes the annual deadline for local submittal of comparative report of local government revenue and expenditures to the Auditor of Public Accounts from November 30 to December 15 and the statement of the Auditor of Public Account showing in detail the total and per capita revenues and expenditures for all localities for the preceding fiscal year from January 31 to February 15.

HB585 (Guzman) allows a locality to incorporate transient-oriented development into its comprehensive plan for the purpose of reducing greenhouse gas emissions through coordinated transportation, housing and land use planning.

HB505 (Knight) provides that once the circuit court has served an allowance of a writ of certiorari in response to a petition from a party aggrieved by a board of zoning appeals decision, the board of zoning appeals shall have 21 days to respond. The Senate adopted a floor amendment so the bill will have to go back to the House.

A House zoning bill goes down in the Senate, but…

…the Senate version lives on in the House!

HB632 (LaRock) went down in the Senate Local Government Committee this week. The Senate counterpart, SB647 (Boysko) has been assigned to the Land Use Sub-Committee of the House Counties, Cities and Towns Committee. SB647 provides for the transfer of certain development approvals when a property moves from one jurisdiction to another and includes a grandfather clause.

Apprenticeship showcase to be held in Richmond

The Department of Labor and Industry invites all interested individuals to attend the “Everybody Builds Virginia” apprenticeship showcase to be held Wednesday, March 25 from 4 pm – 7 pm at the Chester­field Career and Technical Center.

The free event will feature:

Registration is requested but walk-ins are welcome.

For more information contact Patricia Morrison, Director of the Division of Registered Apprenticeship with the Department of Labor and Industry, patricia.morrison@doli.virginia.gov

Please be aware that:

Examples of areas for potential funding include:

The full announcement is available here >